The soil on the WAVIN site in Hardenberg has been contaminated with solvents for a long time. These substances were formerly used as a degreasing agent. WAVIN has been controlling this groundwater contamination since the 1990s. Groundwater was pumped up and cleaned above ground. But this did not definitively solve the problem.

After consultation with WAVIN and the Province of Overijssel, Orvion has drawn up a plan for biological remediation and Mourik Groot-Ammers was approached to carry out the remediation under Orvion’s supervision.

By putting together a project team consisting of Wavin, Orvion, Dion and Mourik Groot Ammers, theoretical and technical knowledge has been combined, which has resulted in a practical implementation with an eye for people, nature and the environment.

A remediation plan has been submitted to the province of Overijssel that forms the basis of the subsidy granted in 2007 in accordance with the business scheme.

In addition to this financial contribution from the government, we would also like to emphasize the good relationship with the province of Overijssel. By adopting a proactive attitude, the next phase of the remediation (bioaugmentation) has been achieved.

The biological remediation started in October 2017. In the places with the most contamination, bacteria of the species Dehalococcoides were injected with nutrients into the soil (see photo). From December 2017 to October 2018, groundwater was also extracted and returned to the soil after adding bacteria and nutrients. In this way, the degradation of contaminants has been initiated on a large scale.

We can now determine the effects of biological remediation. Orvion follows the development of the bacterial population in the soil with precise DNA techniques. More than 8 billion bacteria of the Dehalococcoides species per liter of groundwater are now measured at the place where most contamination is present. The graph below shows how these bacteria convert PER and TRI into the harmless ethylene.

As a result of biological remediation, the extent of the contamination has decreased and decomposition has started. This means that we can now stop the active pumping of groundwater and let nature do the rest.

In biological technology, only renewable, natural raw materials such as lactic acid and acetic acid are used and energy consumption is low. That is why biological remediation is not only very effective, but also very sustainable.

Quote Rene Cazemier from Wavin: “We’ll let the critters do the dirty work now. That is a clean technique that suits this time and our situation. We couldn’t go on forever with the water treatment. We want to get rid of pollution and now the end is in sight” 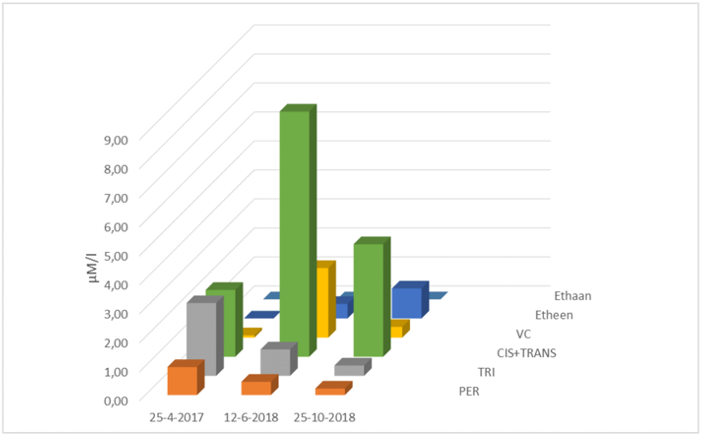 Ceramic filters tested for removal of bacteria from water